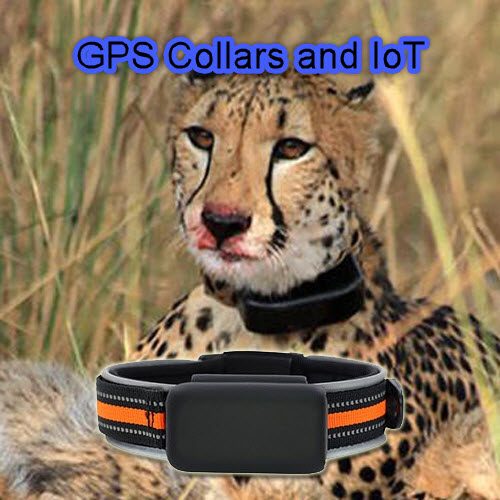 A GPS tracking collar is becoming very popular with livestock, pets and now big cats in Africa, and other parts of the world.

The Internet of Things (IoT) now provides sophisticated ways to protect wildlife: communication networks can cover wild places; sensors can track animals, people, and equipment inside them in (near) real time; and control centres can collate numerous data sources, increasingly with the help of machine learning (ML) and artificial intelligence (AI), resulting in timely management interventions.

Smart Parks is a social enterprise based in the Netherlands and the United Kingdom that offers technology solutions for wildlife conservation, with an emphasis on keystone species that are critical to ecological communities’ diversity and functionality (grey wolves in Yellowstone, for example, or wildebeest in the Serengeti).

A black rhino’s horn is being equipped with LoRa sensors.

Laurens de Groot, co-founder of Smart Parks, told ZDNet, “We began three years ago on a small scale in Mkomazi, Tanzania, where we were the first to place LoRa sensors inside the horn of a black rhino.” “Since then, we’ve developed Smart Parks in Malawi, Tanzania, Rwanda, Kenya, the Democratic Republic of the Congo, India, Zambia, Namibia, and the Netherlands.” We collaborate with organisations such as African Parks, Peace Parks, WWF, and others. We’ve also given our sensor technology to a number of established parks that have their own LoRaWAN networks, such as South Africa’s Hluhluwe Imfolozi. We already have over seventy rhinos and hundreds of other animals under the care of our Smart Parks.”

Smart Parks launched the OpenCollar project in 2019, with the aim of attracting and inspiring “talented students, researchers, and tech-savvy conservationists to build tracking systems that are more flexible and better suited for use on different species.” The modular OpenCollar Elephant Tracker (details at opencollar.io, GitHub, and WildLabs.net) was the project’s first deliverable, and it’s currently being tested in Liwonde National Park, an African Parks reserve in Malawi. Since open-source hardware may not be suitable for all businesses, Smart Parks also offers a range of devices developed in collaboration with product development firm IRNAS.

LoRaWAN-based GPS collars are being fitted to lions and cheetahs in the new Smart Parks/OpenCollar project, which is also taking place in Liwonde. For predator collars, LoRaWAN networking allows for high-frequency GPS monitoring as well as battery life measured in years rather than months.

Smart Parks is equipping lions and cheetahs with LoRaWAN-based GPS collars of the next decade.

“The new LoRa GPS transmitter collar units, which feed into our Wide Area Network, have had numerous benefits — not only do we get near real-time monitoring, but this comes at a much lower cost than conventional satellite GPS collars,” Liwonde National Park manager Craig Reid said. We see a future in which we have completed the transition to this new technology and are able to effectively, efficiently, and for an extended period of time track our priority species in order to advise our law enforcement and management strategies.”

According to Smart Parks, the lightweight predator trackers can withstand harsh outdoor environments and can be attached to existing collars or come with belting and counterweights. The trackers can be set up remotely and provide comprehensive information on temperature, battery life, and movement (via an accelerometer). This allows settings to be tailored to the behaviour patterns of specific animals, ensuring that GPS positioning is attempted only when the tracker is properly oriented to resolve a location from the satellites, reducing battery drain.

A tracker based on the LR1110 provides more configuration versatility and longer battery life.

The Semtech LR1110 LoRaWAN transceiver with GNSS and Wi-Fi is the brains behind these next-generation trackers. An LR1110-based tracker provides greater configuration flexibility and extended battery life thanks to its low average time to place fix (4.5s) and low average power consumption (27Wh). A large mammal module, for example, could run for 100 months with a four-hour position fix interval or for 24 months with a 10-minute fix interval. Previous-generation devices based on the U-Blox ZOE M8G module normally provided four-hourly repairs with a battery life of just 12 months.

Small mammals and birds may use LR1110 tracker modules because they are compact and lightweight, and their fast position-fixing time helps them to cope with behaviours that provide intermittent access to GPS signals. Such behaviour can be seen in creatures that emerge from thick vegetation or surface at sea only on rare occasions.

“With the rapidly developing industry around the Internet of Things, we are now now capable of providing parks with the capability to detect gunshots using acoustic sensors and identify intruders with smart cameras that operate with machine learning,” de Groot says of the role of IoT technology in wildlife conservation. It’ll only be a matter of time before we can also track animal welfare remotely.”

“As we gather more and more data, machine learning helps us to discover more behavioural trends, providing more situational knowledge that contributes to actionable intelligence — where do I deploy my rangers best?” says de Groot of AI and machine learning. It also makes it possible to deploy more technology and operate more effectively. The time between a poacher entering a park and being discovered would be greatly reduced with smart cameras that can analyse on the unit itself.”

Implants can eventually replace tracking collars, according to de Groot: “A lot of wildlife park owners will really like this because the current collars aren’t very pleasing on the eye and can be uncomfortable for the animals.” It is our goal to make this a reality one day, but it comes with a price.