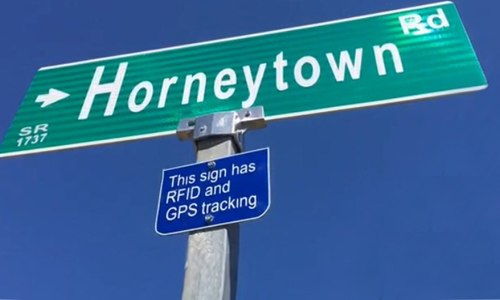 In the United States, a local council has taken matters to the next level, after thieves have continued time and time again to make off with a unfortunately, yet humorously named city’s street sign. That City? Horneytown, population: 15.

Horneytown resides in North Carolina, US and their sign which states the 5km stretch of road is believed to reside in many other locations, all over America. Their exact location however, is unknown.

According to Fox 8 the authorities in High Point, North Carolina have tried many methods to deter thieves from making off with the signage which occurs close to every 2 months.

According to emergency 911 director Terry Bailey of Davidson County, this sign is the most stolen in the county, with the runner up being ‘Rolling Green’.

These rampant thefts have given authorities no choice but to install a GPS tracker device, similar to those that are used in cars; and with it, a neat little smaller sign stating that the sign is being tracked.

An image has been circulating around social media which has already racked up millions of views. Whether or not the ‘installed GPS tracker device’ has prevented the theft is yet to be seen.

One social media user has added the comment “So basically they’ve made stealing it more fun by adding a challenge element.”

Although it’s not all fun and games, this signage theft is a big problem for 911 workers; even with the GPS tracker device installed.

“Those who live around here know the street, they know that it is Horneytown Road which they are travelling down, but the people not from around here can run into issues if they have something to report and the sign isn’t there,” Terry Bailey reported to Fox8.

“It can be a little frustrating dealing with this on such a regular basis, but it’s nothing we haven’t dealt with before and we just try our best to keep the sign in place, with or without gps tracking. For now, we have an extra sign at the ready”